It can be startling for a student to come into a class and be told there is no grade, per se. It is unthinkable for many because it represents the polar opposite of their classroom experience up to that point.

But two professors from the University College’s Department of Focused Inquiry are implementing a new and innovative grading model that helps make a way for a more holistic and organic education in their sections of UNIV 111, UNIV 112 and UNIV 200, Focused Inquiry’s three-part course sequence where students learn critical thinking, writing, problem solving, information literacy and core competencies.

Allison Tharp, (top) Ph.D., and Tara Burke, (bottom) are the two Focused Inquiry professors who brought this model to University College and Virginia Commonwealth University last spring in a set of pilot courses that used the model. The two have since adopted an alternative grading model for all of their future UNIV sections.

“When the pandemic hit, a lot of people were really interested in thinking about how changing our assessment practices could be a step toward more equity, particularly for students in the midst of a global crisis,” Tharp said.

The alternative model, which is known as “contract grading,” allows students to take an active part in their own assessment. This active participation is presented to students as a contract in which they help set the terms of assessment, while also meeting certain criteria to retain the A that they start the course with.

“This method of grading tries to get instructors to see the systems we’ve created, often unconsciously, and really think about how we can aim for equity in learning outcomes for our students,” Tharp said.

This method of grading tries to get instructors to see the systems we’ve created, often unconsciously, and really think about how we can aim for equity in learning outcomes for our students.

Along with student buy-in to the model, contract grading also emphasizes divorcing the idea of quality to a percentage and reducing instructor biases in the grading process.

“My contract has to say here are the things in my class that you have to do to show that you're growing and learning through the writing and material,” Burke said. “It’s so that you [the student] are participating with the grade, not just waiting on me [the professor] to tell you how good I think you are.”

My contract has to say here are the things in my class that you have to do to show that you're growing and learning through the writing and material. t’s so that you [the student] are participating with the grade, not just waiting on me [the professor] to tell you how good I think you are.

Tharp echoed this and added that what matters is that students are practicing the skills that are transferable and that will help them become stronger writers and critical thinkers. By practicing the process of drafting, getting and receiving feedback, revising, reflecting and engaging with the course material, all the goals of Focused Inquiry’s shared curriculum are met without the need to interpret and quantify a student’s creative work, Tharp said.

Basically: Students get to not worry about writing toward the rubric or a certain percentage point. “I think often a lot of us teachers, from a really good place, tell our students ‘The grade doesn’t matter. Try things. Experiment. Push yourself out of your boundaries.’ Then we put a grade on the quality of that,” she said. “Alternative forms of grading, like contract grading, allow students to actually take risks without the fear of a punitive response from instructors.”

When Tharp and Burke piloted contract grading last spring in their Focused Inquiry courses, they were eager to see how students responded. How would students who have, up to this point, been so enmeshed in traditional grading take this new model?

The response was overwhelmingly positive for both professors, they said. The key, both Burke and Tharp said, is to establish trust early on and demonstrate to students they will receive feedback to understand how they are progressing in the course. 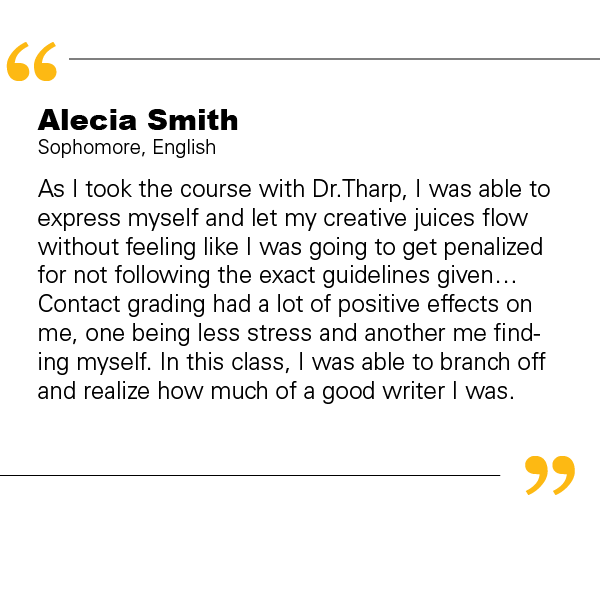 “Students will say ‘I really enjoyed this assignment,” Burke said. “‘I can’t believe how much I have written on this prompt. I’ve noticed that I’m not just trying to work toward the rubric or dial the assignment in for the grade. I’m actually thinking about it.’ It’s them realizing they are not being judged based on how much the instructor is interpreting how much they care about this assignment.”

Both Burke and Tharp said when students are first introduced to the model, they are usually intrigued but really buy in after they receive what is promised in the contract.

“As a whole my students love it,” Tharp said. “ I don’t think it’s an easier or harder style of grading. It’s just a reorientation of something that is central to our job and doing that in collaboration with students is incredibly important.” 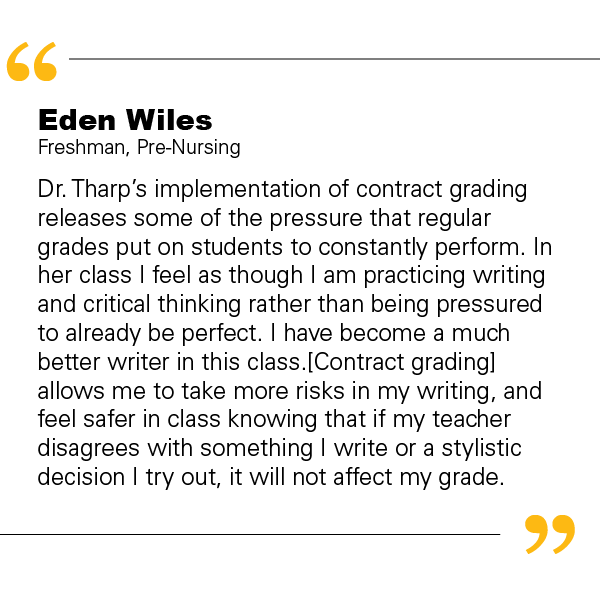 “I got into this for equity reasons, and those continue to be incredibly important, but I’m sticking with this because of the increased joy and intrinsic motivation that students find in a course they often come into disgruntled because they have to be there,” Tharp said.

When Tharp views the sections students take that use contract grading, she said she likes to view them as a healthful disruption to a student’s academic journey.

“I like to view our classes as one little slice of interruption to that [typical grading] process,” Tharp said. “I hope that our classes can remind students that there is something they have gotten from these classes that will benefit them as humans, not just as students trying to make it through a very rigorous system.”

Burke attributed the adoption of this grading model in her classes as a revelation.